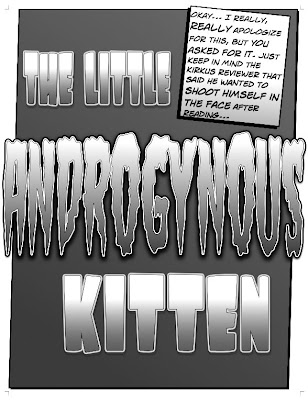 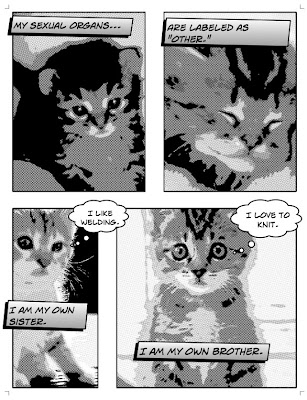 I am really sorry about that.

That is just wrong on so many levels.

Okay. So yesterday, I'd mentioned that the only recipients of the deeply psychologically scarring amputee-with-a-hook-swatting-your-ass-in-front-of-every-kid-and-employee-in-the-fucking-school were boys. Yeah... stands to reason, right?

And I did get a bit of an argument from Kelly about how she'd been paddled in grade school... but two things: 1) her trauma does not compare to what happened to the boys I went to school with; and 2) I know for a fact that where she went to school is, to this day, under dispute as to it actually being part of the United States; okay... three things... and, 3) yeah... so where she went to school, girls couldn't wear pants. And what, exactly, do you think would happen to boys who wore dresses where I went to school?

But I digress. But that's what I do.

There's something to be said for the extreme disadvantage society places on those of us individuals who are unfortunate enough to have been born with an X and Y chromosome pair.

One of the most strikingly disproportionate examples of gender representation available is in the US Congress, where women account for something like 16% of the membership, although, obviously enough, women account for about 50% of the population. Why do people NOT want women to be national legislators? I don't know... probably because they'd pass all these programs that take care of our families and keep our house in order.

But... there is an example of gender representation that is far worse than the one evidenced in Congress... or, at least, apparently enough: Male authors of Young Adult Fiction.

I'm just making this up, as usual, but just look at all the "Best of..." lists, award nominations, and so on... and it's like guys don't even write at all. Or maybe about 5% of the population of authors happen to have a set of... XY chromosomes. Not very diverse lists, to say the least.

Note: Before I go any further, I will admit that when I posted comments about my Five Best Books of 2008 a few days ago, my pick for what is BY FAR the best book of 2008 was a crossover YA novel written by a woman (which, as I said, appears on no list anywhere).

Over the past year or so, I'd been invited to participate in a few groups aimed at encouraging young people to become writers. The strange thing was that each of those groups had NO male contributing members.

What's going on? We need to stop writing and preaching literacy as though our only perspective and audience are female.

Okay... lots of women writers are going to be pissed off at me for saying this... but we need to find and encourage male authors to serve as role models and mentors to boys who might actually want to apply their X-Y perspectives to writing. And there are PLENTY of great male YA authors out there who can do it, but you wouldn't know it from a lot of the lists, conferences, and let's-get-kids-to-write-because-we're-young-and-hip-authors-who-all-happen-to-be-girls groups out there.

Male YA authors of the world unite! We have nothing to lose but our second-class status. It's time for us to break through the Paper... I don't know... thing that's a barrier, or ceiling, or whatever.

Which makes me think. I wouldn't mind glass ceilings if the bosses upstairs wore skirts. But I digress again. So... here's a shout out to my comrades in this struggle: let's sit around and have a beer and talk about how guys can't write, never could write, and should be continually discouraged from doing so.

At least, that's the message those of us with the xy deficit have been getting from every side for a hell of a long time.
Posted by Andrew Smith at 7:26 AM