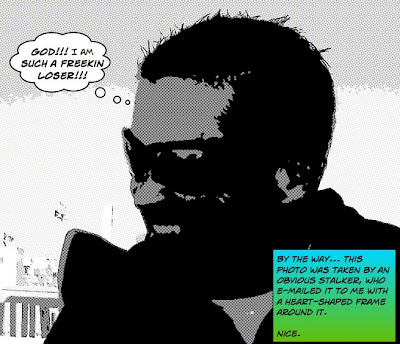 Okay... I know I'm a loser. I know I think about things too much. But, I honestly could not sleep after reading a comment left by "anonymous" on yesterday's blog. It wasn't that the comment was mean-spirited or angry, but it seemed like I was being misunderstood (I know... that's totally immature and pouty of me), so I wanted to put the comment up here and try to explain myself.

If I ever could pull that off anyway.

I really feel that I should point out that no actual bookseller would stock your book next to "Hop On Pop". Number one because "Hop On Pop" is a classic, but also because we determine the difference in content by reading the books.

Okay... okay... I thought I was being pretty much over-the-top, but I listed Hop On Pop because it was the only children's book title that I knew from a children's author whose last name began with the same letter as mine. (You know Smith and Suess... seriously, I know I overthink things, but that's because I'm a loser) Secondly, my exaggeration was based on an earlier bit I'd written about how YA is lumped into Children's Lit, in general, in a number of lists (such as in SCBWI), and I think my statement reads as a fairly wiggle-roomy contingency that hinges on the ultra-weasel-esque qualifier of "might." Third... whoa... it's a classic? Honestly, I've never read it. I have seen it, though.

Don't get mad. I'm not picking on booksellers. The whole point of this blog is me picking on me for being such a loser and for seeing things (like the suppression and dumbing-down of males) that I think are so obvious and nobody thinks are big deals so I must be insane, right?

So... I'll tell you the truth. I have two children: a son and a daughter. When my son was a baby, I read to him every day. Seriously... I'd hold him in my lap when he wasn't even strong enough to sit upright and I read entire novels to him, page by page. I read him Hawthorne, Twain, Melville, Hemingway (he really liked some of In Our Time for some reason), Faulkner, Stevenson, Verne, Crane, Octavio Paz, Ray Bradbury... but I never read him one book that rhymed, ever. I'm pretty sure his mother did, though. He's a hell of a reader, too... but I don't know anything about books for children, so I just pulled the H-O-P reference out of my modern-culturally-deprived ass.

Oh... I did read him The Giving Tree, too... but it doesn't rhyme, and that was my older brother's favorite book and it became mine when he died (he was a kid), so I kind of don't like reading that one.

The comment goes on (with my own parenthetical responses):

I cannot say where "Ghost Medicine" would sit at Costco,


... or Target, but at our store it will move over to YA after 6 weeks on the new book wall.