call the papers... smith gets serious

Okay. So I've been thinking about a lot of stuff in the last few days about writing and reading and being a man and stuff. So this may, as is usually the case, end up getting a little scattered.

A few days ago I was lamenting (not a very manly verb, I'll admit) about the fact that YA Literature is so girl-oriented, female-generated, and frequently anti-male... and how the majority of outreach programs aimed at inspiring young people to write are... well... girly.

That's just the cut-to-the-chase version... sorry if it seems abrupt. I apologize, too, if it sounds sexist... because, believe me... it is really the absolute opposite of sexist if you stop and think about it. I think I can make a very strong case for the fact that males (and male interests) are dis-included or, at least, underrepresented in this particular field.

For example, I recently joined the Facebook SCBWI (Society of Children's Book Writers and Illustrators) Group (I am an SCBWI member, by the way). I checked the list of members this morning on their page. So far (and the group just started yesterday), there are 120 members, 10 of whom are males (I think "Billy Bones" is a male, but I'm not absolutely positive. Unfortunate name, either way...).

What a universe this would be if there were only an 8% male population distribution. I mean... think of the possibilities...

Part of the problem, obviously enough, is that some YA authors (and, I'm guessing, especially male ones) kind of bristle at the term "children" when it is applied to what we write. The simple fact is that for many of us, the label "Young Adult" doesn't refer to a reading level, it refers to an underlying philosophy that helps to shape the content and thematic structures.

This is modern YA Literature: It is not dumbed-down, big-print, monosyllabic, rhythmic and rhyming picture books for teenagers who can't read challenging fiction... it's a new way of looking at the classical and recurring problems of humanity through the experiences and perspectives of contemporary, fresh characters.

I like to read and write YA Literature because I can be more tolerant and empathetic to the characters. For example, I am less likely to feel sorry for a 40-year-old stockbroker who conceals a lie and keeps secrets from his friends and family than I would for a younger character -- simply because that stockbroker should have learned his lessons in life and matured by the time he's forty. But it's easier to put up with moral misjudgments in younger protagonists because, as readers, we hope to stick with that character as he or she grows through having to deal with these kinds of critical issues, usually for the first time in their lives.

If that makes sense.

The other thing that strikes me about modern YA Fiction is the breadth of the category. Forgive my closed-mindedness, but, to me, it's reasonable to lump together all Children's Lit in one broad category... but to include YA within Children's Lit is probably about as accurate a placement as lumping all plants and animals together in the taxonomic super-classification of "Living Things," and leaving it at that.

Worse still, is that within YA we have fantasy, sci-fi, romance, humor, chick-lit, and every other sub-genre that you'd see on "Adult" shelves in a bookstore or library. So, when someone proposes a topic like "What's your favorite YA book of all time?", that's kind of like asking, "What's the best thing you've ever seen on paper... EVER?" And that would include take-out sushi, the Declaration of Independence, your last paycheck, or Blood Meridian, arguably the best book ever written in the English language.

...And, if you're asking those questions to a room of 1000 people... and only eighty of them are guys... then guess what's going to happen? The guys won't answer because they'll be sitting together making completely inappropriate comments to one another while the 920 women there talk about... well... you know.

But, those 920 women will also have a great deal of authority in determining what kinds of books boys should read in their reading clubs, in classrooms, and what will be stocked on the shelves of libraries.

Guys... we can only hope they get it right.

The bottom line is that boys do read. But a lot of times, boys who like to read have to adapt their tastes to the limited offerings available to them. I can't tell you the number of times boys whom I've never met before have told me exactly that when I see them at book signings and author visits.

A quick little (true) story... I, at one time, belonged to a writers' group of published authors. I was the only male in the group. One day, the topic came up about cover art for our novels. The eager discussion seemed to reach a general consensus (I abstained) that the anticipation of cover art was just like the excitement and nervousness a young girl feels when she is waiting to get her very first menstrual period.

I am not fucking kidding you.

So... the next day, I diplomatically, however lamely, left the group.

So... I'm going to leave it at that. I'll talk more about the specifics of YA Literature in coming posts. 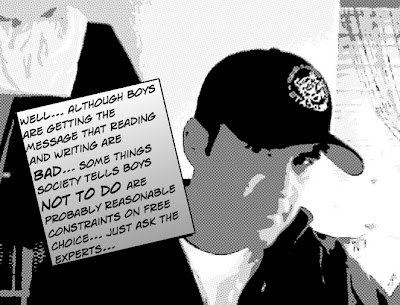 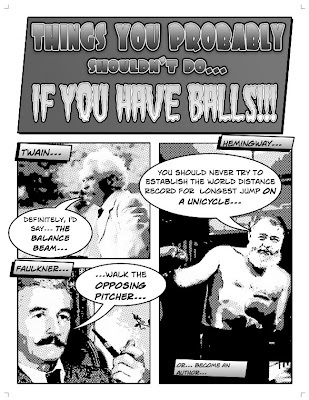