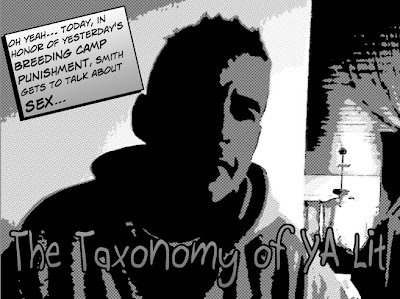 So... I want to make some further taxonomic distinctions regarding YA Fiction, especially as these distinctions relate to characters and their motivations.

But first, I'd just like to say that many of us in writing and publishing have been a little angst-ridden over the sour turn in the economy. But, I was confident that this would happen: on Thursday, Publisher's Weekly ran a piece about how strong holiday sales have been for teen books. That's nice to hear.

Notice that PW used the term "teen books." Eh... maybe, maybe not. Here's the deal... as I said a few days ago, YA tends to get lumped into the broader category of Children's Literature, along with Middle Grade, picture books, etc. That means, unfortunately, that a bookseller who is stocking Ghost Medicine might shelve it on the same rack as something like Hop On Pop. I mean... what do you do with something like that, right?

And then there's Middle Grade, too: books that are not quite for first-graders, but not quite as challenging as books for teens (sometimes called Young Adult... but remember: YA is NOT a reading level... it's a content/theme descriptor).

Here's my theory on some key differences... and it all has to do with characters and their motivations.

Characters have four basic motivations underlying their behaviors. Their behavior is either aimed at securing some tangible reward; gaining attention; escaping an undesirable situation; or securing some sensory satisfaction.

That's it. No other reasons exist. Period.

Categorizing books as Middle Grade or Young Adult, then, doesn't really have a lot to do with the age of the principals, but their motivations. In other words, for something to be appropriately categorized as Young Adult, it has to have sex in it.

Now... don't overreact. I'm not necessarily talking about detailed depictions of sexual acts, I'm talking about some underlying recognition of sexual tension, attraction, and imagery... things that begin to shape themselves as major motivators to human behavior when we cross the threshold out from childhood, especially in the teen years. If you aren't nodding your head in affirmation, then you probably didn't have much fun as a teen.

So here's a big, uncomfortable reason why YA should not be lumped in with the superclass of "Children's Lit:" sex.

I'll talk more about character motivation (in detail), sex, altruistic behavior, and Young Adult Literature in posts coming up this week... but, for now, I am right in the middle of writing a pretty sexually-tense book.
Posted by Andrew Smith at 10:55 AM