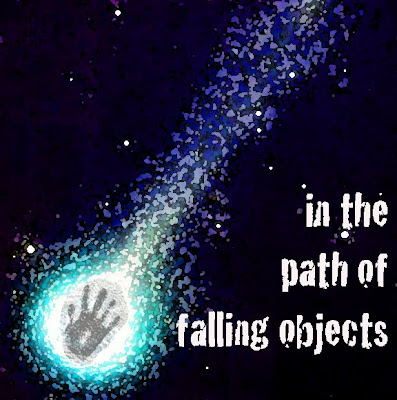 But yesterday, I forgot to include the little excerpt from in the path of falling objects that is on the cover of the galley. So now, it all starts to come together. Here it is:

The car was a 1940 Lincoln Cabriolet, black and white with broad white-walled tires. Its top was down, and, as it neared, crunching and kicking back the dirt of the road, I saw a man at the wheel and a pretty yellow-haired girl sitting in the front….

It was as out-of-place in that desert as a sailboat would have been, and it was the kind of car you knew had to carry stories with it, but I had no intention of finding out what those stories told.

“We should ask them for a ride.”

“No.” I looked at Simon, then put my head down like I didn’t even know or care about that car coming up alongside us.

I warned Simon again, “Don’t even look at them.”

So I just concentrated on not paying that car any attention. And it wasn’t until later, until it was too late for both of us, that I found out Simon was sticking a thumb out to beg a ride.

Thanks to my editor, Liz Szabla, and the rest of the team at Feiwel and Friends/Macmillan. They have pretty good taste.
Posted by Andrew Smith at 6:22 AM