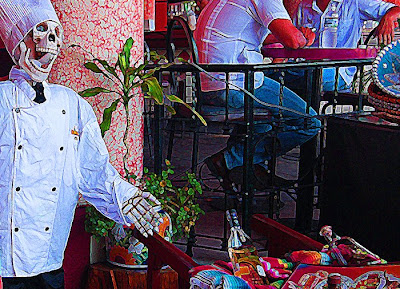 I have, like, five stories to tell about the Southern California Independent Booksellers Association show yesterday in Los Angeles, so you'll have to bear with my hypergraphia, because this is going to be long in the telling.

Okay. So I get down there a couple hours early. After all, I like hanging out at book shows and looking over all the titles on display, especially the galleys of books not yet released. So I checked in with the registration people and got, as expected, my extra-jumbo, hang-around-your-neck name badge, customized with a red and gold ribbon that said AUTHOR on it.

And you know how I feel about name badges.

Anyway, I slip the badge on and duck into the exhibition hall and wander around the displays before the event actually opened to the general population. That was cool. I even saw my book on display. I was going to take a picture of it, but I didn't want to look like a dork. Well... I mean more of a dork, since I was wearing a name badge with a red ribbon on it already.

But the signing tables weren't set up yet, and I had some time to kill before I was actually supposed to be there, so I decided to go for a walk. First step... off with the name badge.

I noticed a long time ago that people at conventions and expos have no trouble walking around with their badges hanging from their necks. I see them hanging around downtown, in public, getting in and out of taxis and limos with them.

What's wrong with me?

Why do I hate wearing them so much?

Oh well. So, I take a walk around in the famous Millennium Biltmore Hotel, just looking at stuff. It's a pretty nice place, I guess. Eh. Anyway, even though I hadn't shaved in a few days, and was sporting a bit of a beard, I didn't think it looked bad or anything... I didn't think I exactly looked like a homeless terrorist, but apparently the security staff at the Biltmore did.

Yeah. I know. Things like this always happen to me.

Because I'm a loser.

What I didn't know is that one of the Biltmore's brawny and stealth agents had been following me around, no doubt deftly ducking behind the abundant pottery and overstuffed chairs any time I might turn his way. Okay... so the Biltmore is pretty boring. It's cadaverous, to be honest, with about as much personality as a velvet painting of a clown face from Tijuana. So I decided to go back down to the Expo and answer my email on the iPhone until my signing table was set up.

Hey... I thought to myself, I think I'll go pee. So I went into the men's room nearby the Expo. This is where the significance of the title comes in: Boy Rules. Because the men's room was completely empty, but there were, maybe, 16 urinals to choose from. They were all set at different heights, too... so I was faced with, like, a freekin calculus problem.

I felt like Goldilocks, except I was a guy, and instead of chairs it was urinals. Oh, and the story never said if Goldilocks had to pee as bad as I did.

'Cause guys know that if you have a choice of which urinal to pee in... it's just like the realtor's mantra: location, location, location. And, then if you've got a choice of high-rises, knee-level tureen-styles, floor-to-shoulder cascade models... I mean, which one do you commit to? I mean, come on! ... the choice factor was so overwhelming I began contemplating the virtues of Stalinism. I'm certain there were no such places in the Soviet Union where you had to choose your favorite design qualities among what amounted to be a freekin museum hall of urinalia.

So I finally settle on the perfect model for me: a not-too-flashy midlevel in an upscale neighborhood with a limited view.

I know. I know. I overthink things sometimes.

Well... all the time, actually. Because I'm a loser.

Did I mention I was still being followed by Agent X?

Yeah. So there I am, halfway through a rather satisfying pee when I hear the door open.

Okay, Boy Rule 2: When peeing at a urinal and you hear the door open, you never look to see who just came in to the room. It's just a rule.

I hear footsteps walk past me, to the back of the restroom. I hear the guy turn around. I'm still peeing, but I think to myself, obviously this guy is overwhelmed with the choices, too.

Then, the guy comes right up to me... like, total invasion of personal space distance, and I look at him. He's massive, dressed in a suit. The Biltmore's Agent X, saving the planet once again.

Okay. Boy Rule 3: Guys know this. You never, never initiate a conversation with another guy who is at a urinal and peeing. It's okay (but a little weird) if you're the guy peeing and you start a conversation, but NEVER the other way around.

And, I may as well add Boy Rule 4: If, let's say, for the only possibly acceptable reason (like, let's say, to mention, hey, bud, did you know your legs are engulfed in flames? or, hey, bud, I hate to tell you this, but a highly venomous brown recluse spider just lowered down from its web onto your penis) that you actually do initiate a conversation with a guy peeing at a urinal, you NEVER stand where you can look down over the top of the "modesty wall."

Yeah, Agent X tore up his boy card that day.

So, there I am. Peeing. I say, "Well, Steed, I can't honestly say I feel like a guest right now."

Yeah. Two things: First, of course, he didn't get it. Second, and this may ultimately become an ancillary Boy Rule, you probably shouldn't be a smart ass when you are peeing at a urinal and talking to a security agent who takes himself a bit too seriously.

He glares at me. Yeah, I catch him looking down, too. And I'm thinking, why can't you just wear the stupid freekin name badge like everyone else does? Do you like having gigantic and confused ex-cons follow you into urinals?

I am such a loser.

I clarify. "I am not staying here. I plan on leaving as soon as you're finished watching me pee."

Not smart. He starts to reach for a walkie-talkie. Or maybe pepper spray. I don't know.

He looks really confused. I can tell words like "author" perplex and confound him. Seriously.

I say, "Books. You know those things that authors write and some people read?"

Now the guy is really pissed off (no pun intended), which is rather Zen-like, because I'm pissed-out and ready to zip up and be off.

The story doesn't end here... but I will continue later. And I haven't even gotten to the other SCIBA stuff I wanted to tell about.

BoNoBloMo
Posted by Andrew Smith at 7:06 AM