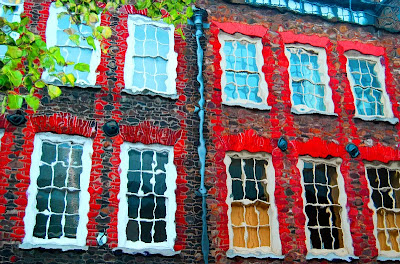 Last night, which rapidly became this morning, I attended a meeting of a nameless but impressive book club, all of the members of which had read in the path of falling objects.

Now this is a club who does it right, with many of the attendees dressed as characters from the book, mini statues of Don Quixote, meteorites, and scorpions under glass on display. So... big thanks for having me.

We had a great time, and a very lively discussion of the book... and I got to sign lots of copies, which is always fun.

We also talked a bit about my next books, and I was kind of disappointed because I had gotten too busy during the day to swing around my home and pick up a copy of The Marbury Lens. I had planned on reading them the opening few pages, just so they could start thinking about one of their 2010 club selections (They hosted me for Ghost Medicine last year).

It's kind of remarkable how quickly time goes by. Today, I am going to be receiving the final version of The Marbury Lens before the galley pages get run, and I understand that an actual cover is being designed, too (right???).

So, here, just for the nameless book club, I offer a teaser, the first few paragraphs from The Marbury Lens:

I guess in the old days, in other places, boys like me usually ended up twisting and kicking in the empty air beneath gallows.

It’s no wonder I became a monster, too.

I mean, what would you expect, anyway?

And all the guys I know – all the guys I ever knew – can look at their lives and point to the one defining moment that made them who they were, no question about it. Usually those moments involved things like hitting baseballs, or their dads showing them how to gap sparkplugs or bait a hook. Stuff like that.

My defining moment came last summer, when I was sixteen.

That’s when I got kidnapped.

When we were working on the edits, right here, on the page, my editor wrote, "I dare anyone to put this down after that."
Posted by Andrew Smith at 3:21 AM