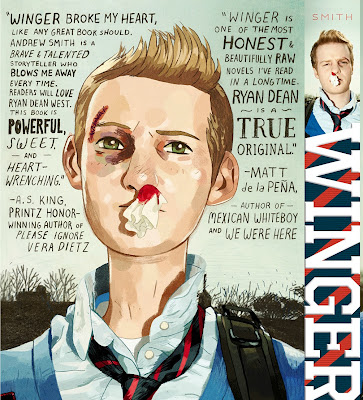 I like to run before the sun comes up, even though it's dark still, and lately the temperatures have been down in the 20s.

As I was running out along the road leading away from my little neighborhood, a pickup truck pulled over onto the shoulder ahead of me. Running past guys pulled over in the dark kind of creeps me out, so I went onto the opposite side of the road.

When I passed the truck, the driver lowered his window and said, "Hey, dude. I see you running out here in the dark a lot. Do you want a vest?"

Then he held this fluorescent yellow vest out for me.

I thought that was really cool, but I declined the offer. I told him if someone was going to hit me, they'd hit me whether or not I was wearing a yellow vest, especially since I do not run ON the road.

I run past hunters with rifles, too. That really creeps me out.

Mark really loved the book, but he asked me how he should go about "reading" the parts with drawings in them. I have to work on an answer for that. When you put pictures in a book, you do it because there are no words for what you want people to experience. If the words are there, then there's no reason to have the picture.

I realized this when I was writing Grasshopper Jungle. Originally, I wanted the book to be a hybrid graphic novel/narrative text, like Winger. I drew some panels and even had an artist friend illustrate some parts. Then I realized I had fallen too much in love with the words of the novel. If you have the words, you don't need the pictures; and if you have the pictures, you must not have the words.

One day, when I speak about Winger and Grasshopper Jungle in public, I'll show the artwork I came up with and talk about the evolution of the finished products.

3. And, speaking of finished products, thanks to Andrea Vuleta, head of Southern California Independent Booksellers Association, I found out that people who really want to get an early copy of Winger will be able to do that.

Here's how: Winger is supposed to come out May 14, 2013. However, people who attend the Teen Book Festival in Ontario, California on May 11 will be able to get the very first available hardcover copies, which will be sold at the festival by Mrs. Nelson's Bookshop. Oh... and I will be at the event, too, just in case you want to get those books signed.

I'm not sure what I'll be doing there, or any of the other details, but I'll share when I find out.