in which i dominate the verb dominate

After watching a bit of the London Olympics over the past couple weeks, I think the English Language should proclaim a moratorium on the verb dominate.

Lately, there have been two items that have been popping up with annoying frequency on my Facebook feed. Although I have commented on neither, they have filled my head with words.

One of them is this:

I read the article, which does not really address the question in the title, and I also read the NPR nonsense in which participants got to play beauty pageant judge and cull out 100 favorite Young Adult novels.

I'm going to whittle my comments down to two points:

1. What makes anyone think that Fahrenheit 451 and the Lord of the Rings trilogy are Young Adult? Are you insane, or are you just condescendingly prescribing to kids the kinds of things you presume they ought to be reading? There is no justification in naming those works as Young Adult.

2. I count 41 spots on the list of 100 that are written or co-written by men. I may have counted quickly, but I think that's accurate. Some of the gender-neutral names may have confused me.

In any event, I can't see this as "domination."

I'm afraid that (and this is according to a literacy and gender study published in 2011 by David Whitehead) the broader community immediately buys into the "unassailable empirical legitimacy" of anything that appears in the popular media which links poor readership to adolescent boys, who for whatever reasons are encouraged to perceive the pursuit as being somewhat less than masculine. So there's an underlying discouragement to literacy and reading for boys (and men) in many outlets of popular media -- which people naturally assume to be unimpeachable.

I believe it has more to do with economics, globalization, and the predetermined future roles of our standardized kids than any fictionally-contrived differences in language processing and literacy abilities between boys and girls (2009, M. Wallentin, for example).

I think the "why" question is a good one. I'd be interested in reading about that. It's kind of like how, a few years back, we started asking why kids were so fat... and we found out it was because of what we had been shoving into their faces.

The second one is this: 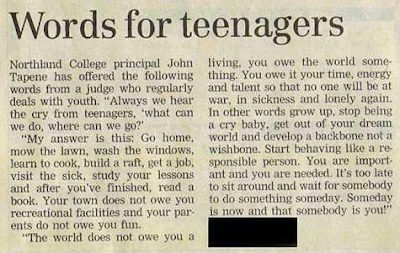 What a smug and gaseous fart wind of condescending claptrap!

And people keep reposting this used wad of ass-wipery saying things like, right on! right on!

Who the hell is Principal Tapene talking to? Who does he expect to change with his sermon?

I have two teenagers (an XX and an XY) of my own. They don't need to hear this kind of crap from a man in a black robe. They are not spineless crybabies, as Principal Tapene assumes all teenagers to be.

What makes this even remotely cool and right-onish?

What if Tapene gave similar speeches called "Words for Girls," "Words for Homosexuals," or "Words for Black People" in which he uniformly ascribed to these groups all society's collected bigotry and prejudice regarding their character deficiencies?

Attention Facebook Nation: This is stupid shit. Nobody will ever read something like Principal Tapene's ass-blathery (and, mysteriously enough, I think Northland College is in... wait for it... Wisconsin -- CONSPIRACY!!!) and change their life because of it.

If they did, imagine how frightening our future might actually be. Especially if we succeed in convincing boys that they can't read, shouldn't write, and that reading is essentially a feminine pursuit?