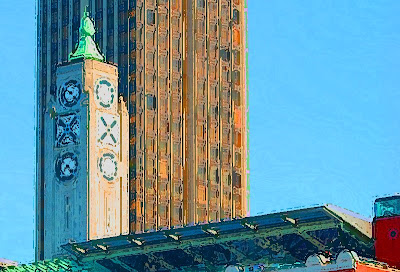 I've got a special series of blog posts I'll be doing this month I think you'll enjoy. I'll explain momentarily, but I will begin by saying I don't expect to blog every day this month since I'll be out of the country this time next week. I will probably disappear from here by Wednesday or Thursday... but, not to worry, I will have my trusty iPhone and email, for those people who need work out of me (or just have some good news to share).

I still don't know what that phone sounds like when it rings.

And I thought I'd mention, too, that I finally resolved that issue I was having over ONE WORD in the final version of in the path of falling objects, so I'm pleased with that. Really, it is a burden being so compulsive about those kinds of things, and constantly over-thinking them.

Because I'm a loser.

The problem is, that one word, in its various forms, occurs in the book 33 times. That may sound like a lot of echoing going on, but keep in mind the book is just under 85,000 words long. So... it's fixed. It's good. It's ready for cover art and a galley printing.

Now, to explain the title of the post and what I'll be offering up from time to time this month...

Since November is National Novel Writing Month (NaNoWriMo), and there are always so many people out there who try to write a novel for the first time during November, I thought I would tell a few stories about New Authors' Moments of Panic (NAMOP).

I've had lots of them.

Almost too many to count.

Because I'm an over-thinking compulsive loser.

Like the ONE WORD, for example. Oh yeah, those moments do not diminish simply because you have more than one novel out there. Well... not, at least, when you're an over-thinking compulsive loser they don't.

Anyway, most of these will be funny. I think. And not designed to discourage any new authors out there, either. They just happen, so maybe I can talk you down from a ledge or something when they happen to you.

And I invite my author friends out there to share their NAMOP stories too. Oh yeah... two things... one) friends??? are you kidding me? and, 2) these things, in reality, probably don't happen to any other new authors because it's me... the over-thinking compulsive loser.

But, anyway, if you do have NAMOP stories... share them.

My first, phone calls from hell, will be posted later today or tomorrow.
Posted by Andrew Smith at 6:16 AM