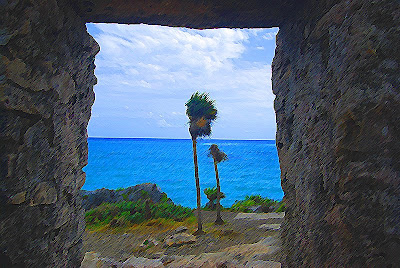 Well... it's what I do, anyway. But this is the special part. Because how I write is -- I'll spend a long time putting a story together in my head, researching stuff I don't know about, and so on. And then, when it starts coming out... look out.

That's when I get especially crazy.

It's going down on paper (well, virtual paper, I guess) now. So I will be... um... not myself (?) for a while. Whatever that means. Who knows how long? Maybe a couple months.

All things considered, this has been especially crappy week. I even talked to my wife again last night about my quitting writing. I said it would be a lot easier than she thinks and then maybe we'd both be happier. She told me not to. I wasn't kidding. Now it's too late, though. It's coming out.

And I have to go to a funeral tomorrow. Grandma Betty died last week. She was my kids' great-grandmother, and they were really close. Her husband, Howard, fought at the Coral Sea. He died a few years ago. He used to crack the kids up by dislodging his upper plate.

They were really great people.

At the end of her life, I could just pick Betty up in my arms when we'd move her from place to place... it was like she was disappearing. My uncle Gene and I drove her to her assisted living home, a house she shared with other elderly people, and we'd flirt with her roommate, Sylvia.

Grandma Betty was cool.
Posted by Andrew Smith at 4:29 PM