back in the day 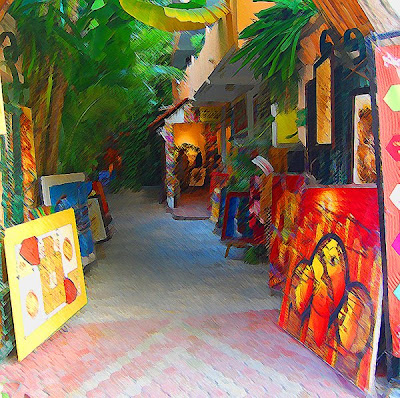 I realized something today about the way I write. Well, it wasn't like I didn't already know it; I just never put it into words until someone asked.

I was asked recently if I always knew how my books would end before I wrote them. I'd have to say that when I'm writing a book, I have at least two major -- and different -- endings in mind. But what invariably happens is that as I am working through the script, characters begin making choices that grow increasingly complex as their personalities develop. Sometimes these choices surprise me and end up presenting the possibility for unforeseen conclusions to the story.

So... the bottom line is, no, I really don't know how one of my books is going to end before I write it. I just let nature kind of take its course.

I will, however, make a plot outline... nothing more than a numbered list with usually no more than one or two words at each entry... just to keep my mind focused on what I want to happen. But this is usually only done about five steps in advance. You can kind of see this mechanism in in the path of falling objects, because I actually use chapter titles in this book... and they are all (with only a couple exceptions) just one-word titles.

So, I got an email from an old friend from back in high school. He has become, of all things, an English teacher. I really do believe that the fundamentals of writing and love for literature I learned in high school really brought me to where I am today.

I want to share an excerpt of his email with you... and my comments are in red:

Just thought I'd share what I remembered about you (and myself) when I'd learned of your success in publishing--a telling memory, it turns out.

Remember 10th grade English with Mr. H(I am omitting the name of the teacher because I am afraid of English teachers)? Maybe you recall the day Mr. H had the class read two different poems.

After several minutes, he asked who liked the first poem better. Almost everybody raised their hands. H pinched his lip, as he always did when something sort of stumped him.

Then he asked who liked the second one better.

Only you and I (and maybe one girl--flower child Tina R? Couldn't have been Tina... I think the only time she ever raised her hand was to hoist a clenched fist and proclaim something about power... or something) put our hands up.

The first poem was a trite rhyming something by an anonymous poet H dubbed "John Noman" (to this day, I'm quite sure a line of the poem was, "When the going gets tough, the tough get going.") The poem that we liked, though, was nothing less than Dylan Thomas' "Do not go gentle into that good night..."

Small wonder that I went on to become an English major (and teacher) and you became a writer.

Nice story. And I totally remember that day. And I will never forget that poem, either.

But that's what good teachers do.
Posted by Andrew Smith at 3:34 AM