why there were never any girl ninjas 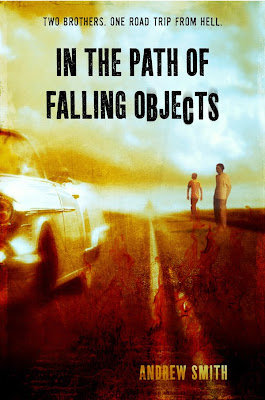 I'm not going to talk today. I'm scrapping the rest of the brains blog.

But here's some good news: I found out yesterday that Ghost Medicine will be coming out in paperback in 2010 (the year of The Marbury Lens), and that my next book, in the path of falling objects, which will be out on September 9, received an outstanding review from Kirkus, coming up in their September 1 issue. Thank you, Kirkus! (sighs with relief) Here's the review:

Smith, Andrew
IN THE PATH OF FALLING OBJECTS

Abandoned by their mother, out of food and even water, 16-year-old Jonah and his brother, Simon, two years younger, embark on a brutal but mesmerizing road trip that steers an unswerving course toward tragedy. Traveling from their Southwest desert home toward the Arizona prison their father will soon be leaving, they’re picked up by Mitch, a murderous psychopath, and Lilly, 16, pregnant and following the path of least resistance. Mitch’s car, a swank classic Lincoln, becomes the scene for much of the action, as Jonah and Simon both fall for Lilly, their poorly concealed interest enraging their unstable traveling companion. Mitch’s plan to kill the brothers evolves at a leisurely pace, and horror mounts as Simon falls under his spell. Jonah safeguards letters from eldest brother Matthew, serving in Vietnam, that graphically document a different horror, with multiple killings officially sanctioned but no less brutal. His parallel story, drug- and violence-laced, is slowly revealed. The cold-blooded murders Mitch commits on whim and Matthew’s war experiences steer this thriller toward the upper end of the range; older teens will be riveted. (Historical fiction. 14 & up)