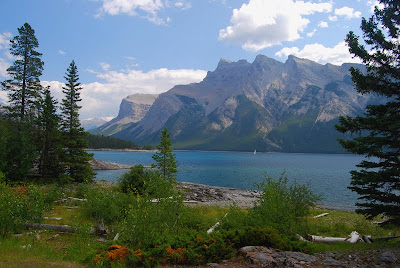 Well the dad-and-kids-off-by-themselves-for-a-week bonding experience has been a surprising treat for all of us and we'll be back in California tomorrow.

In a few weeks, though, we'll be packed again and heading to Dublin, Ireland and London, England. I guess that being the son of an immigrant to America (and the first kid in my family to be born in the US) gave me an appreciation for the rest of the world, and a sense that its people matter. So, if there's nothing else in my life I can give my kids, at least I can take them out there and explore it -- and even get to some of the places I've never been, too.

A couple thoughts on the past week in Canada: People drive slow here, and I like that. Kind of the anti-California, where cars seem to be hitched to one another at 90 miles per hour. And the entire time I've been here, I haven't seen ONE cop -- unless they're disguised as trees or something. Not that I'm paranoid, but everything seems to just get by here. Oh... the bad news... too many people smoke here. People smoke everywhere. Maybe I don't notice it so much in California, because everyone is bubbled-up inside cars, but... damn... cigarettes are everywhere here. And I'd have to say, too, that Americans are in the minority among groups of tourists, too... so, I don't know who's doing all that lighting up.