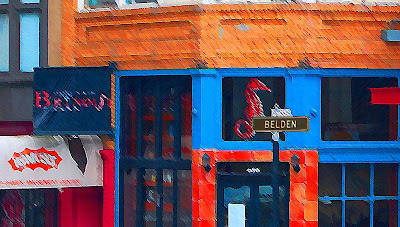 I forgot to include a mention yesterday that our road trip to San Francisco (which actually began as a road trip to the airport, followed by a plane ride, which, in turn, was succeeded by a lost limo ride and a very bizarre cab experience), naturally included a stop-off at Books Inc. on Van Ness.

Oh yeah, we took a cable car up to Van Ness and walked down from there. Anyway, it's a great store, and the location where I'll be signing copies of in the path of falling objects and making a joint appearance with Barry Lyga and Sara Zarr. Don't worry. it will be easy to tell who I am... I'll be the one everyone is saying Who the fuck is that guy? about.

Kind of like when Prince opened for the Stones, I think. Yeah... if you haven't been alive that long -- look it up.

And so, in a couple days, me -- alone -- and the kids are going to take our first-ever dad-and-kids-bonding-time-road-trip-from-hell. Well, again, it will begin in a car to the airport. Then we are going to fly up to Banff in Alberta, Canada. Why? Because we've never been there. Then we will rent a car and drive around in Canada.

Let me just forewarn the Canadian Mounties. Smith has an international driving record that includes extrajudicial detention and blackmail. I'll leave it at that.
Posted by Andrew Smith at 6:21 AM