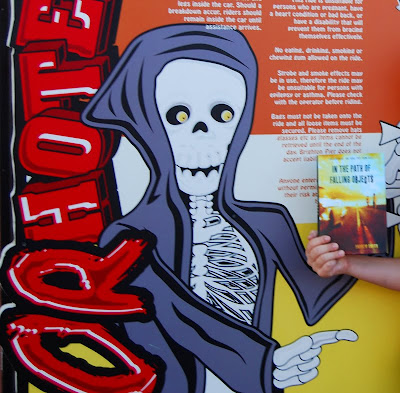 Here's yesterday's (oooh... two apostrophized words in a row) Publisher's (orgasmic... a third!) Weekly (couldn't keep it up) review of in the path of falling objects.

Nice review, I must say:

Smith's Vietnam-era road trip tells the tense, violent and cathartic story of teenage brothers Jonah and Simon, 16 and 14, on the run after their mother abandons them in their New Mexico home. Their older brother, Matt, plans to desert the army, and the brothers all attempt to meet in Arizona. En route, the boys are given a lift by Mitch and Lilly, on the run from Texas. Lilly is pregnant, and Mitch, whose friendly appearance masks a serious psychosis, is taking her somewhere to have an abortion. By the time Jonah becomes aware of the danger Mitch poses, the boys are already trapped in the car with him, and Jonah's developing relationship with Lilly only fuels Mitch's anger. Smith (Ghost Medicine) paints a picture of a bleak time, with Matt's letters from Vietnam highlighting the depressing and frightening lives soldiers led even as the folks back home faced equally uncertain futures. There are moments of bleak, nasty violence, but they rarely appear gratuitous, instead underlining the despair Jonah and Simon feel, and offering something they must transcend. Ages 13–up. (Oct.)

I can live with that. Thanks PW.
Posted by Andrew Smith at 3:23 AM