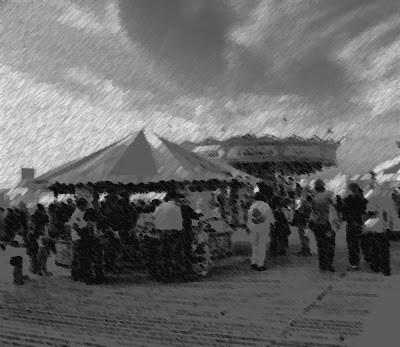 I know it's only late November, but pretty much everything that's going to come out in 2010 has come out. So here, I offer my pick of the best ten albums released in 2010.

A couple points first: I'm really picky about the fact that these albums represent 2010 releases; that they do not include remastered or previously released material. Also, I don't claim to have listened to everything that came out in 2010. But I bought a hell of a lot of new albums. These albums that ended up on my list got here because they initially caught my attention with a single or some cut I heard somewhere, and when I went on to explore the depth of the full-length release, I was impressed enough to say... yeah, this is one of the best. Finally, the only albums on this list that are in any particular order are the top three -- they are my no-doubt-about-it one-two-three punches of fuck-yeah music that came out in a pretty spectacular year. The remaining seven, you could say, are all tied for fourth.

The best album of 2010 by far. I saw Titus Andronicus play a live show this year, and I was blown the fuck away by their passion, energy, and the spirited enthusiasm of their very dedicated followers. So I got this album the following day.

I want to see them again. I want to slam in the mosh pit. "The Monitor" is not only a scathing Civil War depiction of political/social America today, it paints a picture rich in the disillusioned voice of a kid who's from nowhere and has nowhere to go, who can only observe with a kind of sneering and sarcastic detachment a country increasingly split between "us" and "them." No punches pulled here. I love this album.

Okay. You know how sometimes you can go to an art gallery or a museum, and you see something really disturbing and weird, like maybe a dead chicken with a Barbie doll head on it balanced on the lap of a living nude model who's eating Saltine crackers, and you're like, I'm not sure if this is art or shit, but it's really kind of disturbingly cool?

You know how that happens?

Well, The Books are going to make some people feel that way. And I totally love this album. I hate to sound like a douchey, latte-drinking snob, but I totally dig this album's vibe (if I were a total douche, I'd say "architecture," and if I were a total douche who deserves to be punched in the fucking throat, I'd say "schema." In fact, I just stabbed a fucking Bic pen through my fucking palm for even using such a douchebag word as schema)... from the opening lull of the hypnotic "Group Autogenics I" through the stark, cyber-bullying paranoia of "A Cold Freezin' Night," and beyond, this album speaks to me. I don't smoke, but I would sit down and hookah with these guys. I don't do drugs, but I'd eat acid-laced cookies with them. I totally believe these guys are entirely capable of making the creepiest, most psychologically draining soundtrack imaginable to a The Marbury Lens movie.

Where to begin? Okay... how about this: Attention, Bradford Cox... dude, eat something. You're wasting away. Cox is amazing, and I also love his solo project "Atlas Sound." But when I first heard "Revival," a popping, short, twangy single from this album, I remember writing down the band's name with a note to myself to buy the album. The cover photo was a clincher when I saw the vinyl in a record store. Like, super creepy. Then, when I heard "Helicopter," the mournful and pleading second single (and Cox's voice is superb on it), it was a done deal. Had to have this album. "Halcyon Digest" is a remarkable trip through our mind's filters, the personal way we make things better, and invokes recurring pleas for religious answers that seem out of Cox's reach. This. Album. Is. Amazing. Thank you for doing this, Bradford Cox and Deerhunter. Oh... and your website is super-trippy and maze-like. I love it.

Okay, now for the rest, in no particular order:

Much edgier on stage than their slick and electronic production values convey, this album cranks the richly layered elements of everything that's good about Wolf Parade. And they're from Canada. I love Canada. Double win.

It's hard to imagine anything can go wrong when you combine the front-man talents of James Mercer (formerly of the Shins), who writes some of the cleverest lyrics in modern music, and the production/aesthetic/just overall swelling presence of Brian Burton (Danger Mouse). Most satisfying was their live performance (I also saw these guys this year) with a full 7-piece band. Amazing musicianship, unafraid to close an encore round with a cover song, and a promising introduction of some new material -- particularly satisfying because I was a bit leery that this was going to be one of those extremely short-lived collaboration "projects." But Broken Bells is definitely for real.

Okay. A couple things about Wavves (AKA Nathan Williams). Nathan, I feel that since you are apparently about the same age as my sixteen-year-old son, it's okay for me to give you some fatherly advice: First, keep your trousers on when you're on stage (my daughter was in the front row with me, dude), and, second, I really think you should break up with Bethany Cosentino (Best Coast). She's too whiny, accuses you of smoking all her pot, and you need an edgier, more challenging girlfriend who can punish you into extracting more great lyrics. But her drummer is better than yours (I also saw both of these acts live this year... and Best Coast does have an incredible sound, just whiny lyrics). Oh... one more thing: Are you serious? You did a Christmas recording with her for Target? Do you still have balls??? I heard their Christmas song one time. Fifteen seconds into it, I was, like, dude, if I ever hear this again I'm going to ball-peen my fucking skull. And, believe it or not, I can forgive all of this, ALL OF THIS, because that's just how good "King of the Beach" is. Wow. Awesome noise-punk low-fi stuff with a unique sound and biting, ripping lyrics. Nice job, Nathan. And they're from San Diego, which I love even more than Canada.

This one almost squeezed into my top three, which, I suppose makes it better than these others, but I'm not ranking them, and this album is a little too short (in terms of play time, but definitely not in terms of appeal). Dylan Baldi, a youngster from Cleveland, recorded most of his stuff by himself, at home, on his computer, playing everything (if the web-hype is true). When we got a whiff of it, the demand for a live show forced him to pick up a band -- Cloud Nothings. But this kid has some of the slickest, sharpest lyrics written this year... and the tunes live up to the craft of his words. One thing: There's a great video floating around of Dylan Baldi doing an acoustic version of "Hey Cool Kid," and it is entirely captivating. He should think about breaking out the acoustic guitar for the next album. But "Turning On" stands as one of the truly remarkable post-punk efforts of 2010. Love it.

Love. Peace. Austin, Texas. Holy shit. This band has a retro-70s flair, but their message is unmistakably now -- kind of a laughing, snide, and... existentialist? self-deprecating romp through pop-punk life. And suburban Texas. And being Hippies in 2010. What a scene. Listening to "Hippies" is like sitting in a steaming hot-boxed garage and not ever wanting to come out.

You know what? I almost didn't put this album on my list -- not because it isn't one of the best albums of 2010, but because MTV started playing the Keys. Then their music popped up in Subaru commercials and in episodes of "House," whatever the fuck "House" is (honestly, I've never seen it, like every other television show out there). And, deep inside my head, I hear an accusing voice, screaming at me, "Die, hipster, die." So, I'm like, torn. But shit. "Brothers" is an incredible album. I can't deny it. So here it is on my list.

My lone UK representative are Foals, and this, their second effort, is just so tasty, mature, and listenable. Seriously. From their singles "Spanish Sahara," "Miami," and "Total Life Forever," we hear a very well-rounded sample of some of the finest tunecrafting of the year. Get this album.


Okay. A note on who's NOT on this list. Arcade Fire. I'm not going to say anything bad about "The Suburbs." It would be an incredible album for any other band's debut, but it wasn't a debut. So, enough said on that. Also, Mumford and Sons. "Sigh No More" would be on the list, but I've been following these guys since I met them back in 2008, and too much of this album I purchased two years ago. Lose. Technicality, I know.

My Chemical Romance. Dudes. Shut up. No. Really. Shut the fuck up.

And finally, as I mentioned above, I have this particular lack of enthusiasm for bands whose music appears in commercials and on television shows. I don't know why this grates on my nerves, and I truly believe that bands -- like writers (ahem) -- need to make money. But, come on! This year I heard Vampire Weekend on a Honda commercial, and -- holy shit -- Modest Mouse on a commercial for GM's OnStar system.

Now, as far as Sleigh Bells is concerned (also on Honda commercials)... this is definitely a band that should really stick to doing commercials. And nothing else. And you should ask MCR to join you.

Tomorrow: The Marbury Lens and sex.