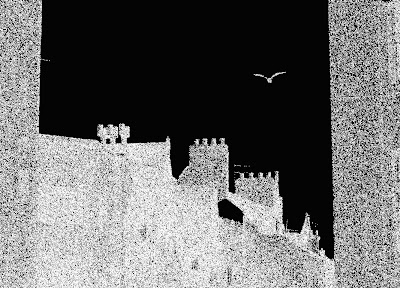 I'll be honest. I didn't think anyone would get it.

Apparently, I bet wrong. In the last few weeks, The Marbury Lens has received starred reviews in Booklist and Publishers Weekly. Then, on Monday, it was named to Publishers Weekly's Best Books of 2010 Issue (Something I am still reeling over). I'm already getting email from readers, and the book just came out Tuesday.

And then, yesterday, Jennifer Brown wrote one of the most careful and specific reviews of the book I've seen -- in the industry publication Shelf Awareness.

When I was writing The Marbury Lens, I was writing only for ME. I do that a lot -- write with no intention of ever showing my work to anyone, much less seek widespread publication. Is that stupid? Egotistical? I don't know. It's what I do.

[Side Note: Last night -- it's been getting down to freezing here in the mountains -- we had a chimney fire. We'd -- no, I -- neglected our (my) responsibility to have an annual chimney sweep out, so a fire started inside our stove pipe near the roof. We had to have the fire department out. Our house nearly burned down. I thought about all the thousands (THOUSANDS) of pages of stuff I'd written on my computer. I even have a very small external hard drive that's about the size of a pack of cigarettes. I could have easily put it into my pocket. Easily. But I left it there. I thought, if the house burned down, then I would have a reasonable excuse to not show up at the book signings today and tomorrow. I know, that's pretty sick, but that's what I thought. And I also thought it would be cool, a relief, emancipating, to have everything (everything) I'd ever written that nobody had ever seen just destroyed, too. Is there something wrong with that? The only thing I took from my house was my wallet and my meteorite. Well, the house didn't burn down. The firefighters were nice guys. They talked about books. Today, we're calling a chimney sweep.]

So, anyway... where was I? Okay. Well, I was writing this beast a couple summers ago, and Liz asked me what I was working on at the time. We'd actually been speaking on the phone when I tried to describe the story I'd been writing. [Side Note 2: Is it just me? I have a hell of a time describing anything that I write. I think I have a tendency to picture the entire universe -- kind of like Jack does -- instead of the parts inside it that are the objects of our attention.]

I tried to tell her about it. She asked a lot of questions, trying to get me to explain the fundamental laws that governed Jack's reality. She asked if I'd send it to her. I said I wasn't finished, but I'd send her the first 130 or so pages. Still, I didn't have a problem about doing this. Liz isn't just an editor, after all, and I truly believed two things: 1. That the work would never be published, and 2. That the work never COULD be published (I thought it was too crazy, that it pushed things too far).

So, like I said, I felt kind of safe and insulated in my conviction that this was only going to be something that would disintegrate to ashes if my house ever caught fire.

I guess I turned out to be wrong about that, too.

You can read Jennifer Brown's review of The Marbury Lens here.