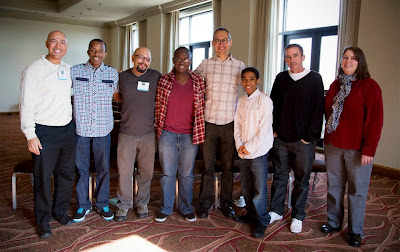 So I wanted to say a few things about participating in the 2012 YALSA Literature Symposium last weekend in St. Louis.

It was a fantastic experience.

This was my first (but definitely not last) trip to St. Louis, and I was pretty much blown away by the city, its people (especially the kids I met), and the awesomeness of the YALSA event.

On Saturday, I participated in the YALSA Book Blitz, where I signed copies of my books for attending librarians. Two things struck me about the event: First, the line for my books was really long. In fact, the books went out so quickly that some librarians went away empty-handed. Second, just about every librarian who waited also had a personal story to tell about my books and readers they knew who'd found a connection to my books.

It was really cool.

But, seriously, all my books were gone in about 10 minutes.

Also, at the Book Blitz, I had a very interesting conversation with a woman. It went like this:

WOMAN: I need to tell you why I un-friended you on Facebook.

(To be quite honest here, I wasn't wondering. Besides, who would ever go up to someone and say something like that??? I didn't even know who she was or what she could possibly be talking about, but I decided to play along.)

ME: Because I'm an asshole?

WOMAN: (laughing) No. It's because my son-in-law is named Andrew Smith and any time I tagged him in photos, it would tag you.

ME: Oh. I suppose it's good to know it wasn't because I'm an asshole, then.

The next morning, I was stumbling around the hotel trying to find some coffee and I heard someone call out "Andrew Smith! Andrew Smith!"

It was not my not-friend from the evening before.

It was Ellen Hopkins.

I was looking for coffee because I was about to participate in a panel discussion with authors Torrey Maldonado, Greg Neri, and Antony John (see photo at top) and four high school-age boys from St. Louis schools, where we spoke about boys and reading and the preposterous myth that boys are uninterested and incapable when it comes to reading.

Let there be no doubt about that. Listening to those kids talk about books was like a religious experience for me. And our room was packed--standing room only--with attentive and fascinated audience members.

The photo below was taken outside the room where my panel was held. We took it to send to our editor, Kelly Milner Halls, because the four of us--Greg Neri, A.S. King, Ellen Hopkins, and myself--are contributors to her forthcoming Ripperology, an anthology of short stories that twist the myth of Jack the Ripper. 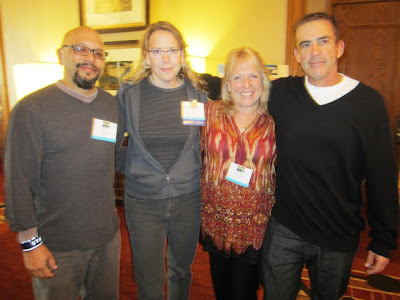