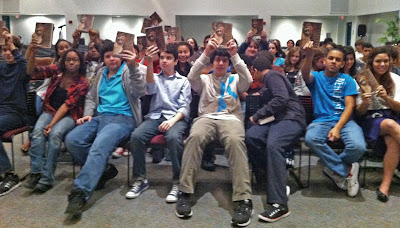 Before I begin I want to say something I forgot to mention yesterday: When Dr. Adams was getting lost and driving me all over Miami, I asked her how Miami-Dade schools were dealing with budget issues--if, like California schools, they had found it necessary to cut days from the school year in order to lower teacher salaries to "make ends meet."

Dr. Adams told me this: Cutting days from the school year was completely off the table as far as the Miami-Dade school system was concerned. That if cuts had to be made, the LAST thing that would ever happen would be reducing the number of school days in the year.

I wondered to myself why California has its head so far up its ass? Whenever schools here in my state (and don't get me wrong--I love California) are threatened with a budget shortfall, the very FIRST thing they propose is cutting the number of days kids go to school.

What a bunch of bullshit.

See those kids up there? They were a group from a magnet high school in Miami who'd come to see me speak at the Miami Book Fair International last Friday. They were ridiculously early, too, but they sat there patiently while I paced up on the stage like a dummy waiting for the technicians to set up the room.

All the kids who attended that event received copies of Passenger, too. There were hundreds of them. It was actually a pretty clever stroke, because all the vendors who were selling copies of The Marbury Lens at the fair ended up selling out of the book.

When I arrived at the fair that morning, I was escorted to my room by Josh, one of the official media escorts for the fair. On our way, we had a conversation that went something like this:

JOSH: Well, you must be a rock star or something. They only put really famous people in that room.

Well, the room was very full. And I spoke to the kids for about an hour on where stories come from in the universe and the importance of words as the defining mechanisms that make what they know become real.

Yeah, I tell kids some pretty weird stuff sometimes. But I think they like my stories and pictures.

And I read to them, too, from 3 of my books, and talked about how those stories pertained to my own life. I read from The Marbury Lens, Passenger, and from Winger.

There was also a very special kid in attendance that day, too: Ian, the now eighth-grade boy who was responsible two years ago for bringing me out to Miami after he'd gotten sucked into Marbury by reading The Marbury Lens. It was really cool to see him again, and see how much he's grown up and matured as a reader. I promised him I'd give him my sole copy of Winger before I left Miami, too (which I did).

Because the next day, I spoke on a panel about Passenger and "darkness" in Young Adult literature, and Ian was there, sitting quietly in the back row of the room.

It was an interesting panel, too, because I pointed out that I resisted the notion of assuming "YA" is an age level, as opposed to being a genre of literature which might be defined by thematic elements, my "essential adolescent experiences."

Eventually, there was no shortage of disagreement on the panel. One of the authors stated that kids stop reading when they're about 13 years old because they have too many constraints on their time.

Let me say this:

If it wouldn't have embarrassed him, I might have pointed to the 13-year-old kid sitting quietly in the back row who'd read every single book I ever wrote and would ultimately nearly finish reading my 400-page Winger before I got off the plane in California the following day.

The author also said that there were certain content issues, which, if you put them in a book about adolescents they would make the book "Adult" rather than "YA" because there are certain things that should not be in "YA" books.

And this is precisely why I hate "YA."

A couple years ago, I wrote a series of posts I called YIH8YA. I think I'm going to revisit the topic with fresh eyes.

So... like I said, I did get an email from Ian when I got back home to California. He told me that he was nearly finished reading Winger, and that it was his new favorite book written by Andrew Smith.

it is the funniest book I've ever read in my life I cant read one page without laughing my ass off it's awesome your best book yet...