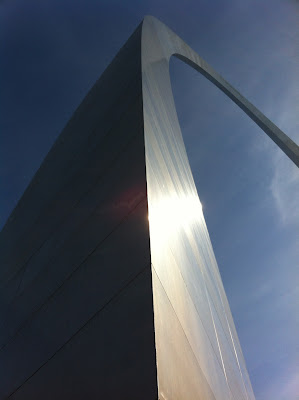 So I'm spending a few days writing about my trip to St. Louis.

It has come to my attention after giving all the talks I've presented over the past few weeks that my books imitate my life, which, in turn, imitates my books.

While I was in St. Louis, I received messages from a librarian in Texas who was actually the first non-publishing-type person to read an advance copy of Winger. I'm pretty sure she liked it a lot.

In one part of the book, the narrator, a kid named Ryan Dean West, gets into a bit of a jam at an airport security screening area.

For some reason, this seems to happen to me consistently; whenever I fly.

When I left Los Angeles last week to fly to St. Louis, I did all the right things to pass through the security check: no belt, no shoes, absolutely nothing in my pockets--you know, stuff like that. They made me stand in one of those machines that looks at your body while you assume the hands-up! position, too.

When I walked out of the machine, the TSA officer said (and these are his exact words) this:

TSA OFFICER: I am alerting on your crotch and buttocks.

ME: (in hindsight, probably not a good idea) Um. Thanks. I get that a lot.

He even showed me his little screen that had a cartoon-image of a body with yellow highlighted areas over... um... my crotch and butt.

I honestly don't know why these things always happen to me, I said, while he ran his hands over the "alert" areas. I also had to have my hands swabbed and checked for whatever atomic particles might be capable of bringing down a jet airliner.

Anyway, such was the beginning of my trip to St. Louis--a scene that mimics one from my forthcoming Winger.

Tomorrow or so, depending on the extent of my jet lag, I'd like to write about the YALSA Symposium.