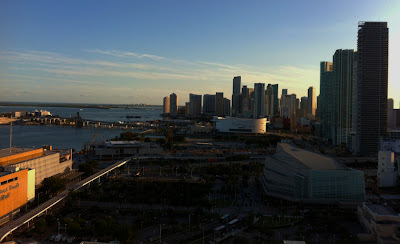 I have spent the last few days sleeping off the jet lag from this past week's trip to Miami.

It was a terrific trip, but the napping was pretty nice too.

On my first day, post-flight across the country, I was picked up by Dr. Leslie Adams, an assistant superintendent for Miami-Dade schools. Dr. Adams was my escort for the day as we visited two high schools and got terribly lost when my iPhone's GPS attempted to make her drive me back to my house in California, which, it estimated, would take us 41 hours of driving time.

In the morning, I visited and spoke at Miami Senior High School, which is probably the most beautiful high school I have ever seen. And I've seen my share of them. It has the most amazing library, too -- and my books were the FIRST books in it, since it had just opened up after renovations.

The staff and kids there were incredible, too. I met entire English classes who were reading The Marbury Lens. So many of the kids there were familiar with my books. One of them, a kid named Mario, sat in the front row at my presentation and offered some of the most complex theories on quantum reality as it pertains to The Marbury Lens, King of Marbury, and Passenger -- all of which he had read.

At that school, I spoke about Young Adult Literature, and how I categorize it as a genre (as opposed to an age level) that touches on five themes -- essential adolescent concepts. One day I'll post about those themes here. I also read to the students from three of my books. It was really a great school visit, and I hope I get to go back to Miami Senior High again. They gave me a school T-shirt, too, which is just about the best kind of gift I could ever get.

I'd post a picture of it, but it's in the laundry because I was wearing it too much.

After that, like I said, Dr. Adams and I go lost trying to go across Miami to visit Miami Springs Senior High. It didn't really matter. We ended up getting there on time, and I had a remarkable conversation with her.

One of the things I really value in having the opportunity to visit so many different parts of the country is being able to see the differences in culture and attitude that exist in educational environments. The Miami schools were both so positive and uplifting. Kids at Miami Springs even decided to form a book club as a result of my visit, and their first book was The Marbury Lens.

Let me say something here, too: Boys in these schools are readers. There was no perceivable gender gap at all. I don't know where this ridiculous myth about boys not reading comes from, but this also became a topic of a difference of opinions about non-readers that came up on a panel discussion that I participated in on Saturday at the Miami Book Fair.

So I'll be Skyping in to Miami Springs High School to visit their book club when they discuss The Marbury Lens. I can't wait.

Tomorrow, I'll post about the Miami Book Fair (which is the best book festival in the country).