In the next 17 months, there will be three brand-new Andrew Smith books on the shelves.

On October 2, Passenger, the sequel to The Marbury Lens, will be released, followed in spring of 2013 by Winger, and fall of 2013 by Grasshopper Jungle.

I know this is crazily egotistical to say, but they are all very good books, and as different from one another as an phone book is from a quail egg.

In any event, four amazing bloggers have gotten together to host Saturday read-alongs starting in June and focusing on my first four novels: Ghost Medicine, In the Path of Falling Objects, Stick, and The Marbury Lens (coming out in paperback this fall, too). This is being done as a run-up to the release of Passenger.

I really have to say how much I appreciate the book-blogging community for getting behind my work. It's sometimes hard to get noticed as a writer when you're a guy, and you're also adrift in a sea of monster-human love stories (I can change you! I love you for who you are! You've been "watching over" me since I was just a child and now we're in love, love, LOVE! Okay, that's a little creepy.), epic and endless series, and books with those brooding, pouty, dark-haired girls whose faces you can't entirely see on their covers.

So, great thanks to the following blogs:

If you click on any of those links, they will give you details of the four bloggers' plans, with more specific chapter assignments coming in May.

I'm looking forward to popping in on some of the comments and seeing what they say about those books.

I also have to give special thanks to all these bloggers for contacting me and ASKING if they could do this. Who would ever say no? What an amazing thing for them to do.

I think the mastermind behind it was Amy (at Lady Reader's Bookstuff), so yesterday I sent her a big box of STUFF for the bloggers to use for their Saturday read-alongs. Here's what some of the stuff in the box looks like: 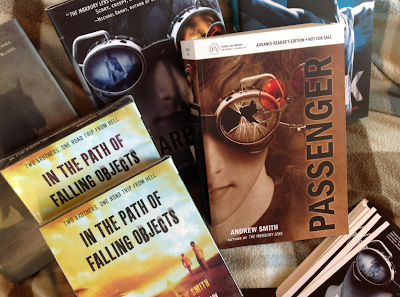