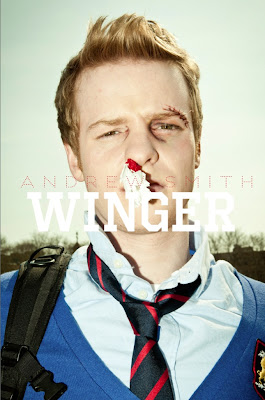 I told my editor at Simon and Schuster that it was a "ballsy" cover.

S&S had really put quite a bit of work into it. They actually started designing the artistic components of the book as soon as we started working on the editorial elements. I suppose that stands to reason, considering the fact the book contains so many graphics.

Way back at that time, my editor had sent me some Polaroids of a prospective model for the cover shoots. He ended up being that guy you see up there. I thought he was perfect for the book for a number of reasons, the most important of which was that he didn't look like a YA Cover Boy, which I definitely did not want. Also, he is wearing a shirt.

They had this guy do some pretty funny things for the photo shoot, but ended up choosing the photo you see above. It turns out to be one of those images that when people get to the part of the book that it's from, I know they'll be flipping back to the cover and saying to themselves, yeah... that's pretty much exactly the way it is in the book.

In the mean time, Sam Bosma was working on all the interior illustrations as well.

In the original manuscript, I had done the artwork.

I intended the artwork to actually be nothing more than placeholders to show what I wanted and where I wanted it. For example, one of the early illustrations is a kind of self-mocking school ID card that the narrator, Ryan Dean West, draws of himself.

My original drawing, which is admittedly pretty clunky, looked like this: 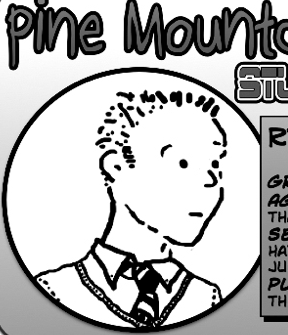 You've probably seen that guy before. I use him in some of the comic panels I draw on this blog.

A little clip from the ID card panel illustrated by Sam looks like this: 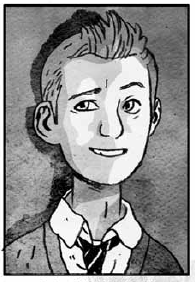 Early on in the process, I had been introduced to Sam and had looked at some of the work he'd done. I really liked his stuff, and thought he'd be perfect for Winger (and he definitely is the perfect choice). I'd even seen some early sketches he did of Ryan Dean and some of the other characters in Winger.

What ended up happening, though, is that Sam's drawings evolved to match the model who was used for the photo shoots on the cover. It's amazing stuff, and a great team effort -- something that Ryan Dean would say is "glorious."

Art that imitates life that was imitating art. 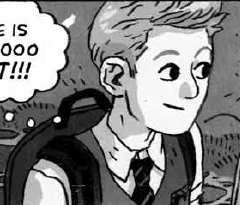