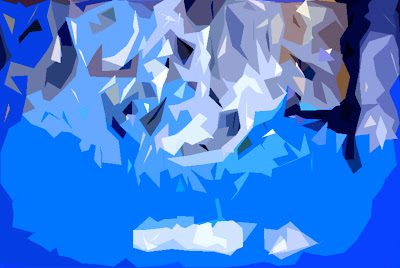 I still don't really know how it works and stuff. My impression of it, as one who doesn't really know these things, is it's like a bunch of people taking turns, giving very short speeches. Right? You're not really supposed to talk to each other. Right?

Whatever. Like usual, I probably screwed things up and made people quietly think to themselves who IS this guy?

So, anyway, the reason I went there was that a friend of mine (yes, you Billy) told me that there was some love going on from San Diego regarding The Marbury Lens.

And that's kind of like telling me to not look at that gruesome car wreck over there.

I have to look.

But, like always happens to me, there was one thing that came up in the Twitosphere that really depressed me. It kept me up all night, in fact. So much that I actually thought about just getting out of bed and writing this bit at around midnight.

I stayed in bed.

Which is not a really pleasant concept to consider: man in bed, thinking about Mark Twain.

Many years ago, I saw this film about a guy who posed a question to people about speech and expression. It had to do with the burning of the American flag as an act of protest. Opinion polls suggest that the overwhelming majority of Americans, despite their political ideologies, find the notion of burning the flag as a symbolic protest to be somewhat offensive.

It makes them uncomfortable.

But (at least, as of this morning) you are allowed to do it.

So the guy asked people if they were offended if he burned a really tiny American flag printed on paper (like a postage stamp), and most people said no, that it had to be a big, cloth one in order to offend them. Not a small, paper one.

Who cares about small paper ones?

So the thing that I keep coming back to in my sleepless mind is that, rightfully so, if a form of expression is going to be expurgated from our collective lexicon, then the door has to slam shut before the first utterance, forever and ever.

While the Word Police may want to send Mark Twain's voice to literary reeducation camps to purge a word or concept from the record, they're initiating a massive undertaking if they really believe they can shut that door tight and sweep all the bad words across the threshold before they lock it.

Look, I don't think I'm bigger than I am. And I don't think Mark Twain did, either (but that's just a guess). I am not a big, cloth flag. But writers do tend to just set down a contemporaneous record of the way that human beings communicate with one another -- with all its music, abrasiveness, idiomatic nuance, and, sometimes, complete absence of subtlety.

It's just what we do.

Well, some of us.

Some of us, I don't know what the fuck they're trying to do.

Which brings me 'round to last night's toss-and-turn fest.

I have failed at keeping it a never-to-be-spoken secret that my novel, The Marbury Lens, contains BAD WORDS.

Let's talk about that, shall we?