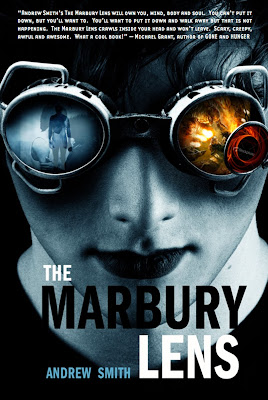 Last night, I finished reading Mr. Smith's next book, The Marbury Lens, and I couldn't sleep after that. Mr. Smith told me I could write about it if I didn't spoil it, which is really hard for me to do, so all I'll say is the ending paragraphs totally gave me the creeps.

I read a lot of books. I grew up reading Harry Potter, and when I was older, I read all the Tolkein books. I read a lot of Stephen King, the Dune books; and I've even read Twilight and The Hunger Games. But I don't have any idea, exactly, just what type of book The Marbury Lens is.

If I had a bookstore, I would probably build a special shelf for it right in-between the YA section and the grown-up books. I know how Mr. Smith feels about the whole "Young Adult" category, and, with this book, I can see why. I think the ideas in the book are very adult, so grown-ups will like it. But the book still fits the very general and vague criteria for YA fiction: the protagonist is a teenager, dealing with difficult issues: trust, friendship, and loyalty (the last of which, I think, is an especially powerful issue for boys).

But The Marbury Lens is also kind of a fantasy. When I researched "fantasy," I found that the main characteristic of the genre is that it contains some elements that can't be found in our real world, or it creates another world altogether. And The Marbury Lens definitely does that. But, unlike most of the "fantasy" I've read, there is no magic or mythical animals in the book, even if there are some really weird creatures here and there. And it's hard to tell, when I read it, if the other world of Marbury is here, in the past, future, or just some crazy hallucination in Jack's (the main character's) head. I figured it all out at the end, though.

So I'm still trying to figure out what this is. All I know for sure is that it's going to be a while before I sleep with the lights off again.