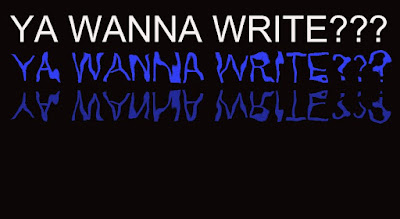 "Here are five bullets for the boys on the boat.

Here is one more for the saint."

Those are two of my favorite lines from the last book I wrote. I realize they don't make any sense just floating out there without contextual anchors, but I just really like the way they have a kind of rhythm and they also paint a vivid, if undefined, picture of something.

So. Here we go. I'm going to lay it on the line, kid. Five bullets. This is something I've been thinking about for a long time, and I may as well try to get it out.

I'm writing today, as I said before, to give an answer to all those great kids I've met in the past couple of years who've asked me to tell them what they need to do to become writers. So, these are my five bullets to being a writer.

One thing up front, though: If you are a (published) writer, and you're reading this, keep in mind that this is NOT about you. If you think I'm wrong and my advice sucks, that's fine with me. Go ahead and comment.


First Bullet: Be patient. There are two key ingredients to being a decent writer: the technical ability, and the voice. Young people can acquire technical ability if they work on it, but voice is usually something that comes with age and experience. Not always, but usually.

As far as the technical aspect is concerned, you simply must have a grasp of the basic fundamentals or nobody will ever take you seriously. Maybe it's that teachers have too many students nowadays, maybe the teachers themselves don't know (I do hear a LOT of math and science teachers whine, "But I'm NOT an English teacher." Um... yes you are, bonehead), but it's almost unbelievable to me how young people have lost their grasp of the distinction between words like your and you're; then and than -- ugh! the list is frustratingly long. When I went to school, we used to drill those things all the time. Kids were better technical writers then, too. Sigh. Today they make better collages, I think.

Also, kids, no, no NO... do not fool yourself into thinking that editors will fix those things. If something comes in to an editor's inbox and it is instantly clear that the writer can't make these basic technical distinctions, it will be shredded. Maybe even laughed at and THEN shredded.

That said, typos are typos. Everyone makes those. We know typos when we see thme.

I'm going to give some advice on acquiring the technical elements coming up in some of the later bullets.

Now, as far as the second essential element, voice: This is kind of my motto, my sales pitch for living life, I frequently give kids who want to write.

Turn your TV off, step away from your computer, take your earbuds out, get out of your home and start bumping into stuff.

And take your time doing it. This is why so many young people who want to write, and maybe even attempt to write their first novel at, say, fifteen, write fantasy. Because they don't have any real-world experiences that they've been able to process through... so it's easier to write about a big war, elves, wizards, and maybe a dragon or two.

Now, I'm not knocking fantasy as a genre, but, come on kids. Get out there and live a little. Then come back and tell me a story.

Now, every so often, a kid will just happen along and blow you away with his chops and maturity -- the distinction of his voice -- as well as his technical abilities.

Kind of like guitarist Johnny Lang, when he was fourteen. It's like, damn, that kid can play. But, generally, you won't have that combination of technique and voice (execution) until you've done some bumping into stuff.

Maybe that's why I'd waited so long, despite having acquired my technical basics by having worked as a journalist and copy writer, before actually taking myself at least a little bit seriously as a novelist. And, over those couple decades, I'd bumped into stuff like this (none of which is recommended): been on an airplane that caught fire, been in an active war zone with explosions going off around me, watched several people die, had friends who'd been murdered, drifted around the world by myself with nothing but a backpack full of dirty clothes, been kidnapped, crossed borders illegally, hmmm... I'll leave the really bad stuff out.

But I bumped into stuff, and I'm here to talk about it. Or write about it.

Okay. So, speaking of bumping into stuff, I met this kid who happened to like my first book, and I took a look at some of the stuff he's written. Here's a little bit:

He’s shy, she says and they nod and smile. Being shy can be cute when you’re a kid. Everyone likes a polite young man. You’ve raised him well, he’s come a long way. But I’m keys jangling on a key chain, I’m coins rattling in someone’s pocket.

Now, keep in mind that this is a kid -- a young adult -- in high school. He's already got both things going for him: technique (as far as I know this did not pass through a professional editor, and I can't find any mistakes. Well... I'd probably use a semicolon after the word "chain," as opposed to a comma, but what do I know?), and he definitely has a voice that we don't see often at all in samples from that particular age group.

This kid could be on his way, and get there a lot quicker than most of us do.

I'm not nearly finished. I've got four more bullets to go.
Posted by Andrew Smith at 6:23 AM