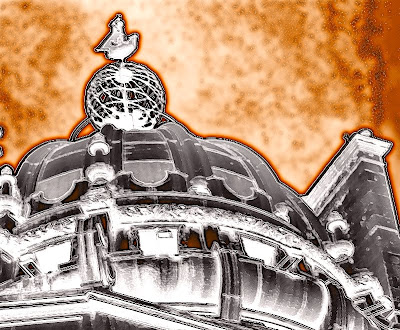 
6:15 AM -- Mr. Smith paused and looked up from his keyboard. I had been watching him "writing" for three hours, and it dawned on me that he only types with his index fingers. I asked him about it, and he said that when he was a kid and worked for newspapers, editors would never hire you if you were a male and typed with anything other than just your index fingers.

He said men who touch-typed back in the old days were kind of like men today who drink coffee with whipped cream and sprinkles, and multi-syllabic names that end in anything like the suffix "uh-cheeno."

He told me that back in the old days, he once knew a beat reporter who had lost one arm in Korea, and that writer only typed with just one finger on his left hand, and he still managed to produce fifty clean words of copy per minute.

Mr. Smith said, "Being a writer is a lot like being in Boot Camp, Nick. Except in Boot Camp, there are people who care about you if you die."

At last the sun was coming up. I had observed Mr. Smith now for four hours, and I found his occupation to be interesting, but, at the same time different (more repulsive) than I had imagined.

During the fourth hour of my job shadow observation of Mr. Smith, I learned that writing requires lightning-fast index fingers, and is not an occupation for sissies.
Posted by Andrew Smith at 3:15 AM