So, here is something I've never shown before--not even when doing personal appearances and speaking about Winger.

When people see Winger for the first time, I'm frequently asked if I did the art myself. Well, the answer is kind of yes and kind of no.

Here's the deal: I've always wanted to write a graphic novel. I do enjoy drawing. But every time I've started work on a GN, I've come to realize how utterly, impossibly  difficult it is. Besides that, I've also realized that when you draw something, you have to take words away, and I've always had a stronger attachment to words than images.

In any event, when I wrote Winger, I did do all the artwork--the comics, charts, graphs, notes, and so on.

And when I finally got around to submitting the manuscript for consideration, it received quite a bit of interest from publishers. Some of the publishers actually liked my artwork (and wanted me to do it!), even though my intent was to simply SHOW what I wanted and where I wanted it to be.

Also, I really really really wanted to work with David Gale (my editor at Simon & Schuster), who loved the book and who also very reasonably thought my artwork was terrible.

Here's an example, taken from near the midpoint of the manuscript. It's a panel I drew called The Dull Point on the Love Triangle, and it's about Ryan Dean West's confused anguish over his attraction to Megan Renshaw (the girl in this comic) and his true love for Annie: 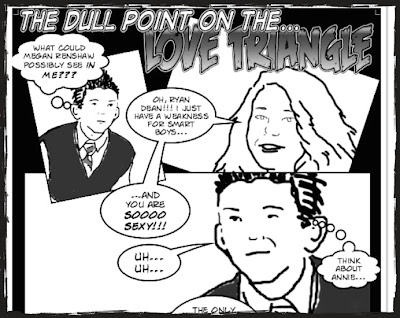 Yes, I draw like an overly-caffeinated seven-year-old with broken thumbs.

Here's a side note: The Megan I drew is based on my own drawing of my 15-year-old daughter, Chiara. Chiara doesn't know this, so don't tell her. It's a horrible drawing and I think she would probably never speak to me again. The Ryan Dean (my alter ego) is... um... a bad self-portrait.

Anyway, David let me look at some sketches he'd gotten from Sam Bosma, and I knew instantly that Sam was the perfect guy to do the artwork in Winger. There's also a great story about how Sam's artwork for the book evolved over time, but I'll save that for another time (and maybe I'll be allowed to show some of Sam's initial sketches for the novel, too).

Here's Sam's version of the same panel (taken with a shaky iPhone--my apologies). Much, much better--especially at conveying emotions. 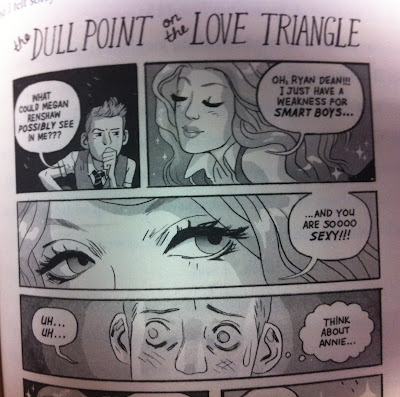