in which the unemployment rate increases 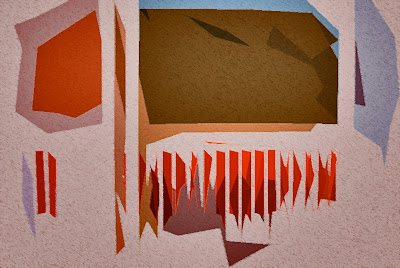 I did not sleep at all last night.

So, I've mentioned a few times now about this short story I contracted to write for a forthcoming YA anthology -- you know, how I wrote the thing at the extreme upper-end of the word count range and I finished it one month short of my deadline.

The story is actually a sub-plot to the novel I am just finishing up, and, well... naturally, I suppose, I like it a lot.

[And, no, that isn't a dumb thing to say... I think at least -- maybe more than -- half the stuff I read these days seems to be written by going-through-the-motions writers who honestly don't give a shit about what they write...]

The background to the anthology was this: The unifying thread stitching the stories together is that they are all YA, Dystopian (yuck! talk about played-out expectations... but -- and you'll agree with me if you've read The Marbury Lens -- my "Dystopian" ain't your Daddy's Dystopia), PLUS the stories all have a love story undercurrent.

So... yeah... this actually fits my arguably-not-typical-Dystopian-YA current project.

Because, after all, all my worlds are Dystopian, anyway. They just happen to be real. And here. And now. Which is why I hate that term, Dystopian. In the same way that to so many people YA equals vampires, or whatever the monster/magical being of the day is, Dystopian now equals the exact same, predictable set of expectations, too.

Which isn't really what the word means.

Sorry for the wide and scenic route.

Anyway, there are lots of "stars" of writing who are anchoring this project. I am no longer going to name their names. Well, except one of them: bestselling author Ann Aguirre.

Ann withdrew from the project a few days ago, and I wanted to know why.

So I looked it up, and found out.

Apparently, "love story" plus "YA," in the minds of many people, excludes love between two males or between two females. "YA" also, to a lot of people, means kids don't swear.

I don't know any "Young Adults" who adhere to those universal boundaries. In fact, I now have a personal policy that if I ever involve myself with a love story anthology and there is NOT at least one story included about a same-sex couple, then I can't be in it.

So, I am now unemployed.

I can't be involved in this project given the editorial stance that was expressed to another author, against same-sex love relationships. The author is someone I won't name, and have never met. But if you're really curious, the story is definitely discoverable.

As far as the swearing is concerned, I will also not be in a YA anthology if there is not at least ONE contextual selection from the following word menu:

[By the way, the story I wrote... and I worked goddamn hard on that sonofabitch, too... included all three of the above. Shit!]

That's it. They just have to have ONE of those words.

That's it: My policy = one of those words, plus one same-sex relationship.

Is that too much to ask?

One of the explanations I read about this earlier editorial decision against having a story in which two boys fall in love was a reluctance to portray alternative relationships.

There's nothing alternative about it.

It's not a goddamned choice.

It's normal and GOOD for young, as well as old, adults. It's just how human beings are. They fall in love.

And we have a responsibility to let kids know that they're okay, and good, and not abnormal.

So, I hope you don't find it offensive that I have now embraced a will-not-participate-in-YA-anthologies-about-love-unless-there-is-at-least-one-same-sex-LOVE-story-and-the-use-of-one-swear-word-from-the-above-menu policy, but that's just how I roll.

Oh yeah... the Dystopian Love Doctor has eighty-sixed himself.

By the way... as unemployed as I currently am, I have this novel called Stick coming out in October.

I really LOVE that story.

In fact, there are some really touching and intense love stories that weave their way through the plot of that book. Because Stick is really all about how love doesn't weaken in the face of cruelty and ugliness -- it flourishes, no matter what.

And -- guess what? One of the love relationships in Stick is between two boys, who really, truly love each other.

And the characters in the book also use every word on my dessert menu, too.

And, guess what else?

Where love exists, despite all the ugliness, and there are no "alternative" versions of love, because love comes in only one form -- pure -- unrestrained by the gender of the human beings it connects and makes whole.

It's not a Dystopia.

Anyone want to buy a story about a seventeen-year-old boxer who falls in love with the daughter of a man who works on a ferry?

(Sound of crumpled papers hitting the bottom of the wastebasket)